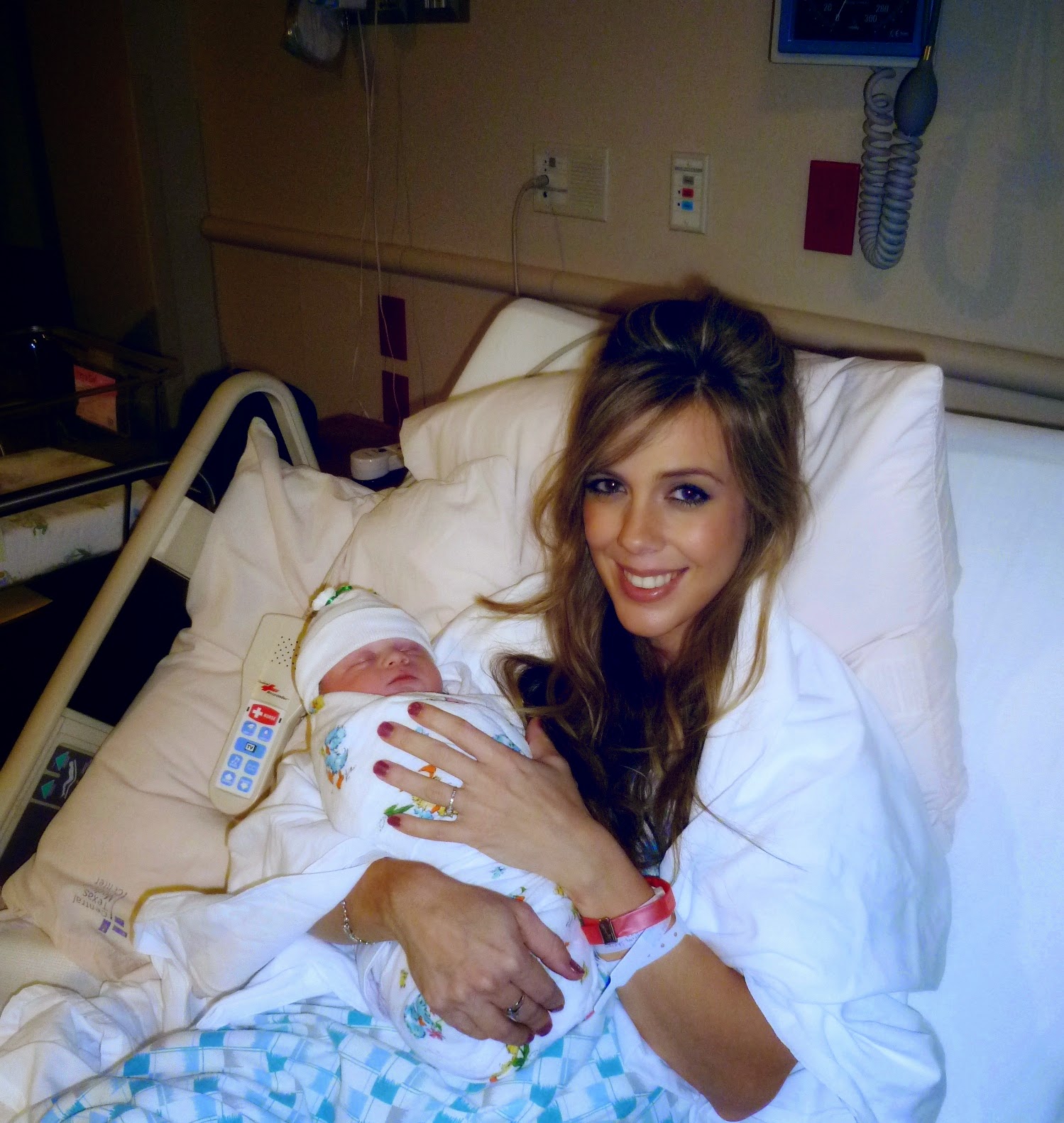 The good Lord has blessed us with four children and each of our birthing experiences have been completely different. Wonderful in their own way, but different. The first three were in a hospital and our last was at a birthing center. 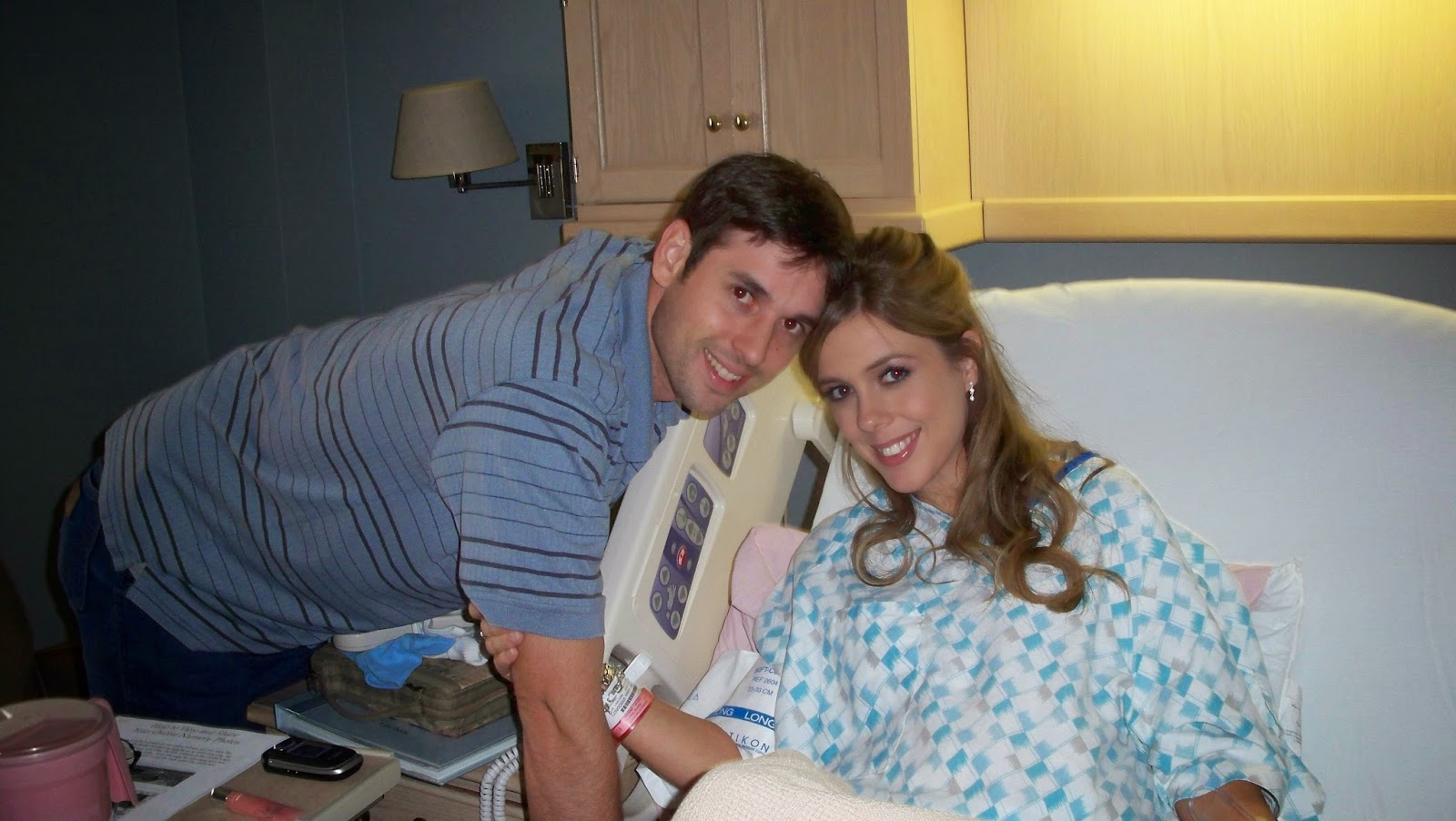 The first birth started with my water breaking at 3am and contractions never progressing. Cue the Pitocin. And the extreme pain. I got an epidural when I was dilated to a 2-3. I pushed for about 45 minutes. I didn't exactly know what I was supposed to be doing and I could feel the contractions enough to know when to push. The meds from the epi made me so nauseous that I threw up after every. single. push. My sweet husband (poor guy) was there to hold the bowl for me. Finally, we experienced our first miracle of life. It was the most beautiful thing I have ever encountered. Same goes for my husband. I sobbed tears of joy. It took about ten minutes for the baby to latch on but when she did, she nursed well. The waiting room was full of family from both sides as this was the first grandbaby for both sides. Recovery was terrible. I could barely walk or use the bathroom (I had to have a catheter because of the epidural). It took days to get over. However, I was in deep love with my baby girl. She weighed 7.6 lbs. Pain scale was a 10 until the epidural and then it is hard to say.


The second birth, my son was getting too big and they were afraid I would not be able to deliver him without a C-section. The doctor suspected my water had already broken and I was admitted at 7am and put on Pitocin. The doctor came in around 10:00 to see if I had progressed. He broke my water at this time. I told the OB I wanted to try to give birth without pain meds. Ha-ha. 10 minutes later (maybe it was 5) I was still talking to the OB and the contractions starting coming hard and strong. I quickly changed my tune and told him I wanted the epidural. He looked surprised as he left to order it. While he was gone the baby started making his way into the world. The nurse had to catch him but not before I begged for some pain relief. She gave me stadol. Didn't love that one bit. It made me feel drunk. Who wants to be drunk during the most beautiful experience of life? Had I only known how close I was to giving birth I would have refrained. She literally game the shot as I started pushing the baby out. However the recovery was much easier without the epidural. And I wasn't nauseated this time. It was easier to use the restroom after and the days after recovery were easier as well. The waiting room was full of people during and after the birth. I was wheeled to my recovery room and it took me a while to become fully coherent. Once the stadol wore off I noticed my son's dimples and I was smitten. He was 3 weeks early and weighed 7 lbs. Pain scale 10. 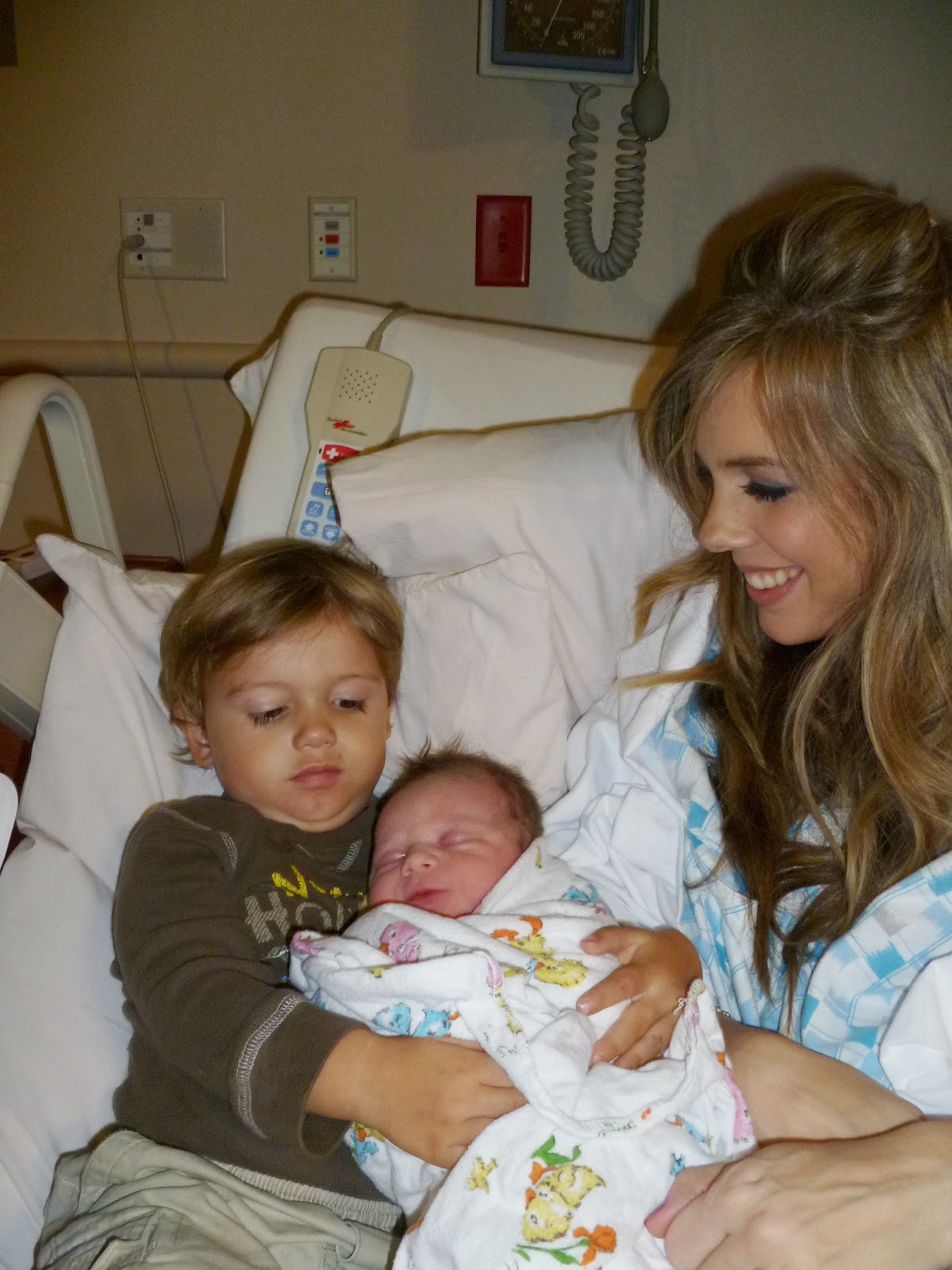 During my pregnancy with my son I began the path to health and by the time my third birth rolled around I was seeking to live a natural lifestyle. I studied the Bradley method and was adamant about giving birth naturally. I taught water aerobics the entire time I was pregnant except the last month. I did exercises out of the water as well. I ate well and drank Red Raspberry Leaf Tea. It was the Christmas season and I woke up knowing that that day was THE day. I had a list of chores I wanted to complete and I also wanted to  bake Christmas cookies with my children. I read once that when you go into labor to bake cookies without a timer. When you start to burn the cookies you know it's time to go in. I called my friend Jocelyn and let her know I was in labor. By this time contractions were 3 minutes apart and she told me to go the hospital. By this time the cookies started burning. I brewed a strong batch of Red Raspberry Leaf Tea and drank it as hot as I could stand it. I then went to pack a few last minute items in my hospital bag. During this time I had a very painful contraction and I had to get on my bed to ride out the pain. I believe this was transition because I remember thinking I couldn't do it and would need pain medication. My husband walked into the room and saw my face. He said it was time to g to the hospital now. His brother, who had come to watch the kids, agreed. I cried. I didn't want to leave my family and my cozy home. I finally consented and got in the car. As I was sitting in the car the pain completely stopped. I remember seeing my belly contract but there was no pain. I thought it was false labor and told my husband we should not go yet. He said we would go anyway. On the way he mentioned that he forgot his hat. I told him he may as well turn around and get it because this was NOT it. He refused and I am so glad he did. Once we got to the traffic light my contractions came on hard and strong. We got to the hospital at 3:00pm. It took about ten minutes to get to the labor ward because I had to stop and go to the bathroom along the way (remember I drank all that tea). I told them I thought I was in labor and the nurse wryly said "We'll see." I guess I didn't look like I was in enough pain! They gave me a gown and I changed while my husband went to get our things. The nurse came in and as soon as I sat on the bed my water broke. She checked me and her eyes got as big a saucers. She said I was dilated to a 9.5 and that the baby was coming. My husband walked in and came to my side. I was surprisingly calm and felt the Lord was with me. The room was a frenzy. Staff running, an administrator trying get my information and another nurse trying to give me an I.V. which I refused. They convinced me to get a hep-lock but before the could even start the baby began to crown! Wow, that ring of fire! I pushed about 4 time and that baby was out! It was 3:20.

The recovery was amazing. I walked to my recovery room. She weighed 7.2 lbs. and had the quietest, sweetest cry I had ever heard. Best experience ever. On a pain scale it was a 7. I was begging to leave the hospital before the 24 hour period was up. 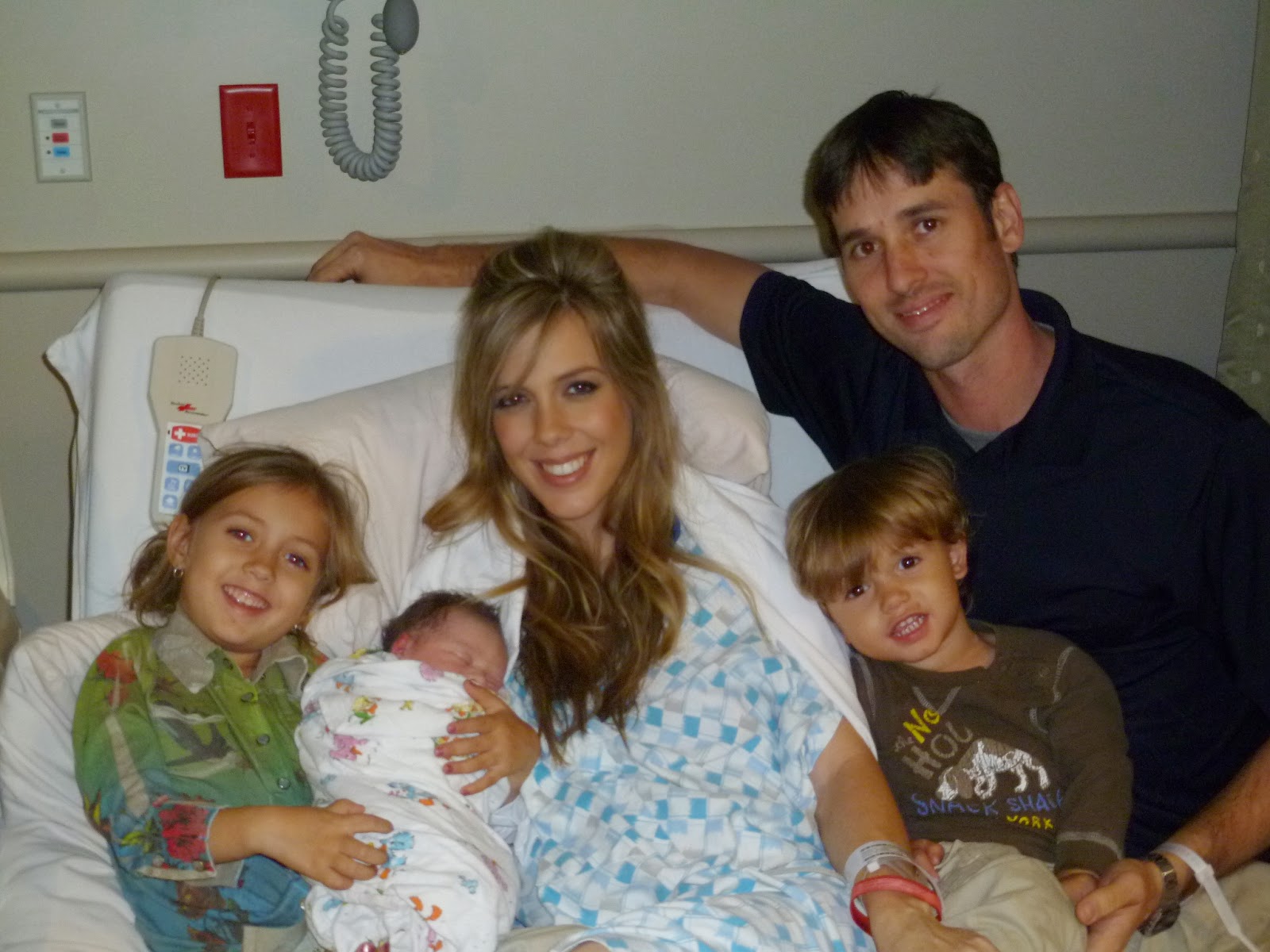 Until then, Grace and peace.
Posted by Adoring Family at 6:03 AM

Email ThisBlogThis!Share to TwitterShare to FacebookShare to Pinterest
Labels: birthing